One of the most fascinating things about roulette is the variety of bets that you can place. Before you play roulette, especially for real money, it is best to have a clear understanding of the different bets and their payouts.

On this page, we’re going to go through every single bet type, including the more advanced Call/Announce Bets. If you want to see a quick “cheat sheet” with all of the different payouts in a graph for quick reference, you will find it on our page on roulette payouts.

Outside bets can be found on the “outside” of the roulette table and the cover a large portion of the wheel, but the payouts are low. In total, there are 5 different kinds of outside bets which are the following:

Red and Black – There are 18 red numbers and 18 black numbers.

Odd and Even – There are 18 odd numbers and 18 even numbers.

The three above bets are “even money bets” because you double your money if you win e.g. bet £2 on black, win £4 back. Each of them covers just less than half of the table due to the addition of the 0 and in the case of the American game, 0 and 00.

Columns – These are similar to the dozens; there are three columns on the table and each of them covers 12 numbers. 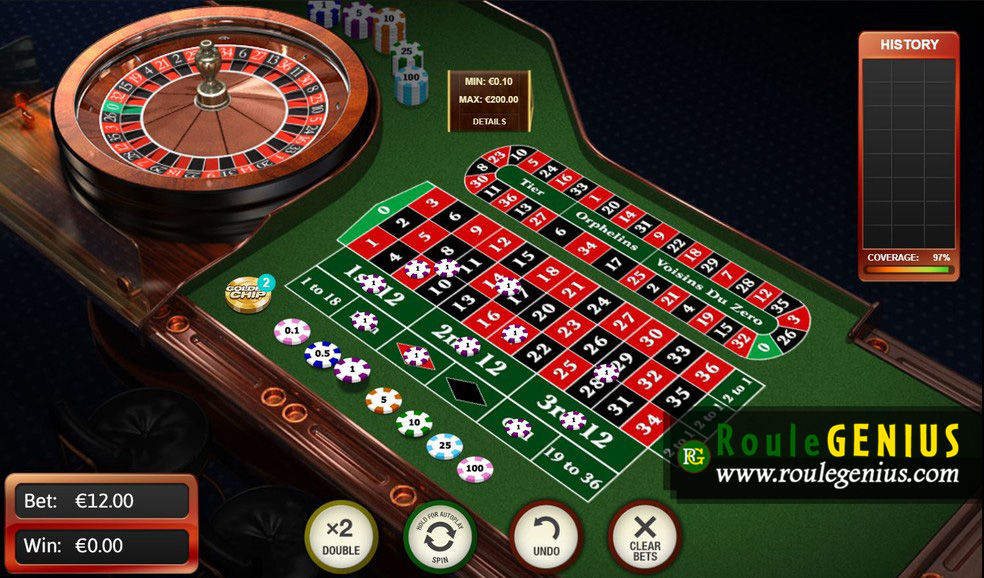 Inside bets can be found on the “Inside” of the table and they cover fewer numbers but the payouts are higher.

Straight Up Bet – This is a bet on a single number.

Split Bet – This is a bet on two numbers that are next to each other on the roulette table (not the roulette wheel).

Corner Bet – A bet on four numbers that make a square on the roulette table. For example, 1,2,4,5 is a Corner bet.

4 Number Bet – Bets on 0,1,2,3 at the same time. Only available on European and French roulette.

5 Number Bet – Bets on 0,00,1,2,3 at the same time. Only available on American roulette. This is also the worst bet in the entire game because of the unfair payout – avoid it.

Double Street (Line Bet) – This is the same as the Street bet except it covers two Streets at the same time rather than one.

The Call bets, or Announce bets as they’re sometimes named, aren’t available on every roulette game and often they’re overlooked by players because they either don’t understand them or they would simply rather bet on the more simple bets above.

This is a bet that covers 17 consecutive numbers on the roulette wheel, starting from 25 and working your way around the wheel to 22. They’re also known by some as neighbours of the zero because the zero is (almost) in the middle of these numbers.

The actual Voisins Du Zero bet is covered by just 9 chips and it is done like this:

A straight bet on number 1

The Neighbours (sometimes spelt Neighbors depending where you are in the world) are 5 number bets of your choosing. Basically you pick your number and then you bet on that number and the two numbers that are on either side of it, making it a 5 number bet. A very easy way to cover large sections of the wheel. Some casinos will allow you to increase the size of your neighbours, up to eight either side of your number, making it a 17 number bet in total.

You may have a hard to find this option online because very few casinos offer it. With this bet, you start by picking a number from 1-9. Once this is done, a bet will be placed on all numbers ending with the number that you chose.

Does this sound confusing? If so here is an example. If you picked 6, a bet would then be placed on the following numbers: 6, 16 and 26 because they all end in 6.

Both online and offline, the Call bets are normally accessible via what’s called a Racetrack and in some land-based casinos, you “Announce” the bet out loud rather than placing chips on it, hence why they’re sometimes referred to as Announce Bets.

If you would like to see the Call bets and try them for yourself, have a go on any free roulette pro game which has all of them available via a menu in the bottom left-hand corner rather than the conventional Racetrack.

Roulette Payouts: how much you can earn?